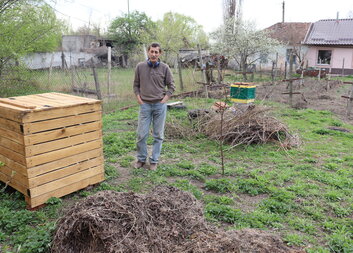 How to prepare compost at home? Find out a secret recipe from the Lisenco family

Composting is an environmentally friendly way to recycle household waste and is one of the most effective and simple way to help your garden restore soil quality, provide nutrients and natural fertilizers at no cost. But how to prepare the compost and what materials do you use to make it? We went to find out these answers from the Lîsenko family's - a family who received one of the 30 composting bins offered by Caritas Czech Republic in Moldova

Meet the initiators of the environmental movement

We found Sergei making the necessary preparations for planting a lawn in front of his house, and Olga - in the garden, talking to 2 young women who turned out to be refugees from Ukraine, accommodated in their house. They were admiring the cherry trees that bloom year after year, whether it's peace or war. And because there is no household without pets I was also greeted, in their own way, by two puppies, the toughest and funniest pets from Odessa. 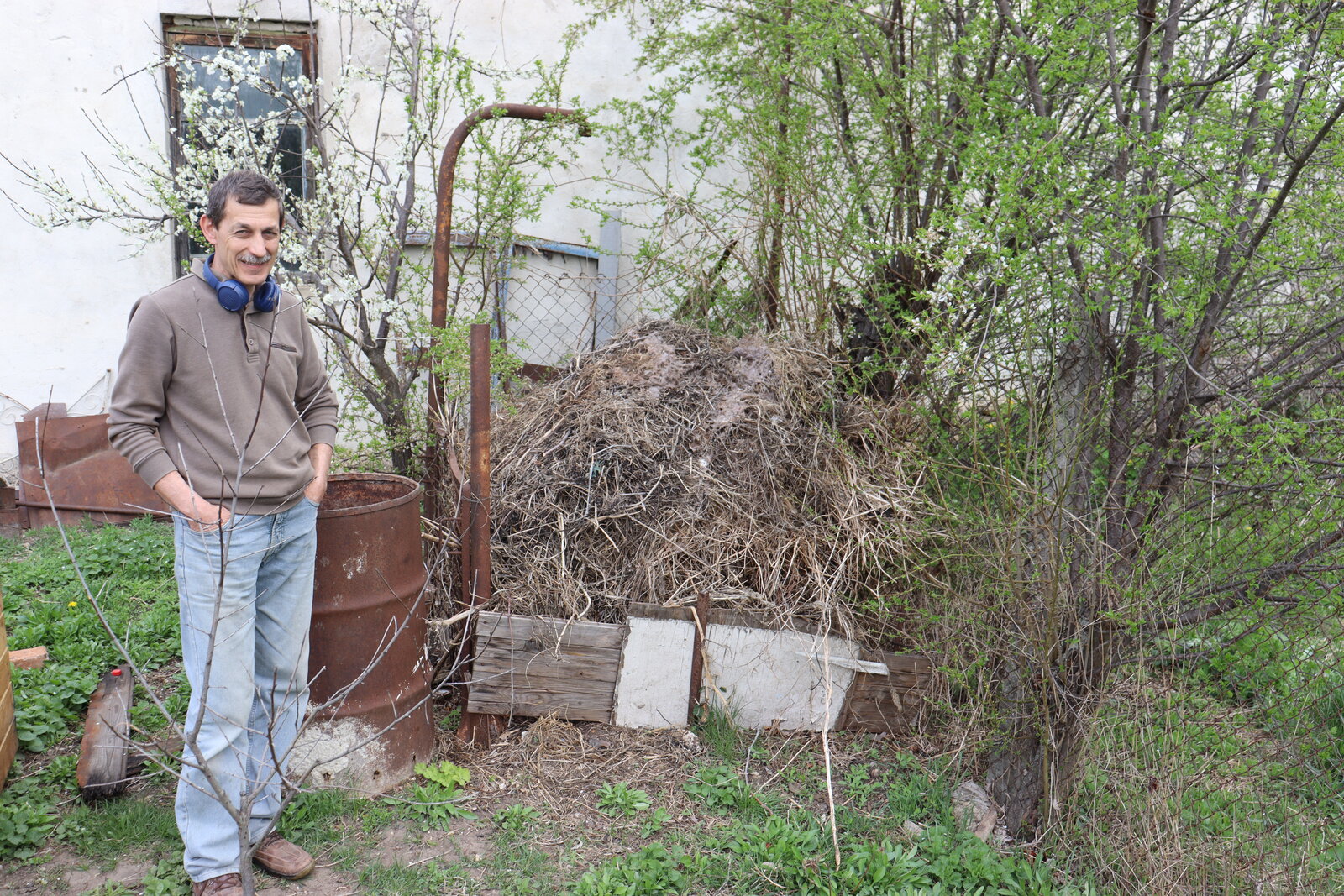 I have heard about this family, considered to be the initiators of the environmental movement in the region, in several talks, and what I saw in their household speaks for itself - ecology is at home here. Photovoltaic panels, drip irrigation, beehives, alternative soil-working tools, coolers and other spaces for storing vegetable waste ready for composting.

'Controlled' chaos is part of the composting process

At first glance, piles of plant waste were scattered haphazardly around the garden, but, says Sergei, this 'controlled chaos is part of the composting process.

At first, it seemed very simple - let the leaves and twigs rot and the compost is ready - just like in the forest. As time went by, I realised that it is not quite like that. But let's take it one step at a time. 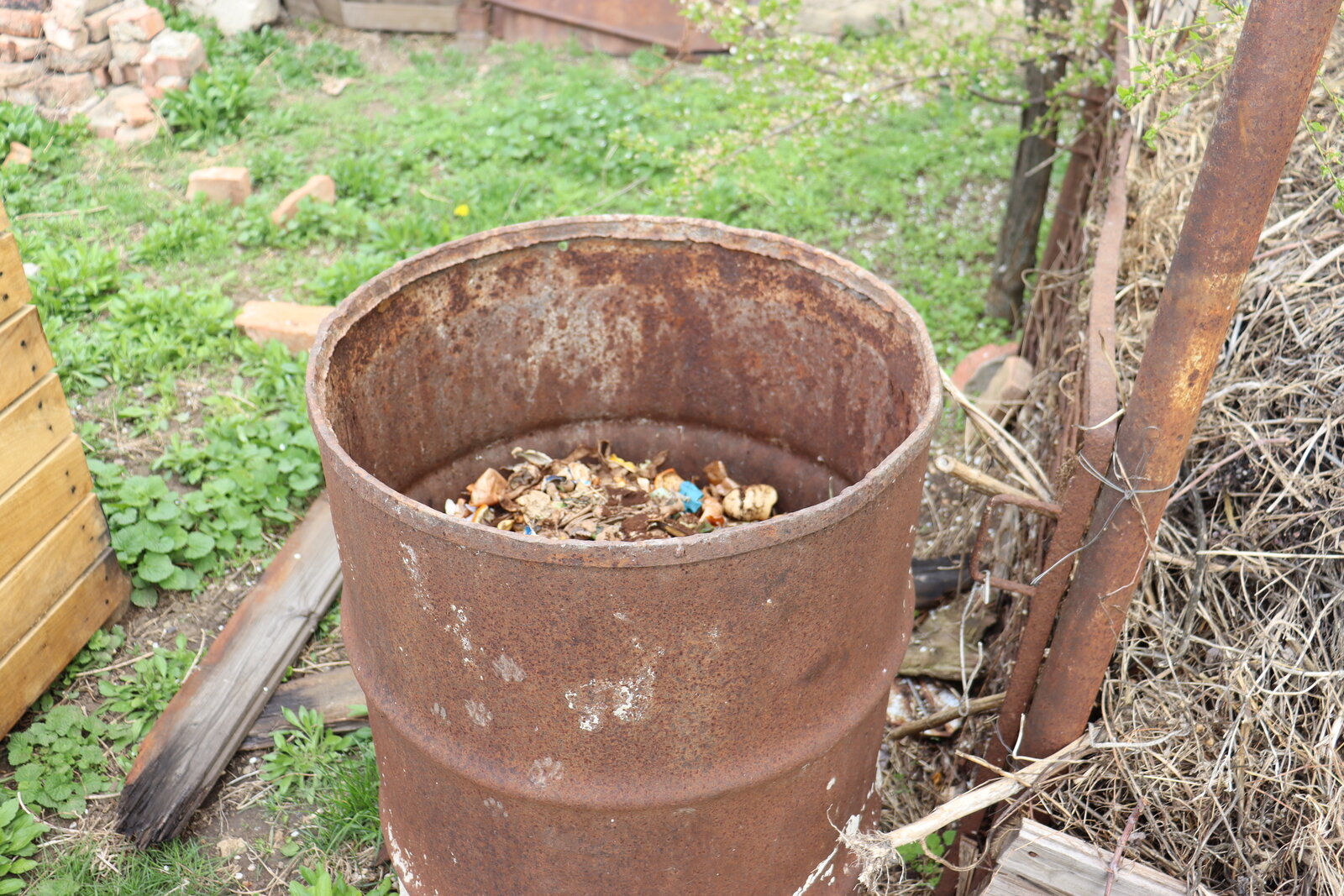 "Vegetable waste is actually a little treasure that ends up in the bin every day. Most of what we need for compost is what we find in the house and garden. Composting is like a cooking recipe - if you follow the proportions and keep all the rules in mind you will get the result you want. The important thing is to be persistent,” says Sergei.

The first rule when composting outdoors is to prepare the space

At first, Sergei built a container from what he had around the house - wire mesh - cheap, relatively environmentally friendly but less aesthetic. But the randomly chosen site does not  always allow for optimal composting. And so the process began.

"The land on which we are going to compost needs to be well ventilated, get some sun and be relatively far from the house, so that the possible appearance of odour doesn't disturb. It is also advisable to keep the chosen composting site away from trees, as there is a risk that decomposition processes will spread to the leaves and bark of trees," explains Sergei the basic requirements for building a compost.

The new composting bin, which Olga also calls the 'enchanted bin', has solved a number of problems – it is made of oak, so it is eco-friendly, it is airy, and the rustic look fits perfectly into the landscape of an urban garden. And to make it weatherproof, the crate has been given a special eco treatment - the wood has been soaked in boiled oil. "The natural pattern of the oak tree stood out, and the colour of the wood harmonises idyllically with the spring greenery," says Olga, who has brought an aromatic coffee to atable under the cherry tree. "While you're enjoying your coffee you'll hear an unusual recipe - that of composting," she adds. Compost with a recipe? Sergei has solved the mystery.

"Compost differs depending on the ingredients used. We focus on what we find in practically every household in Moldova. So from the garden we use grass clippings, weeds (without seeds), dry leaves but not walnut leaves, cut branches and plants that have already fruited.” said Sergei. 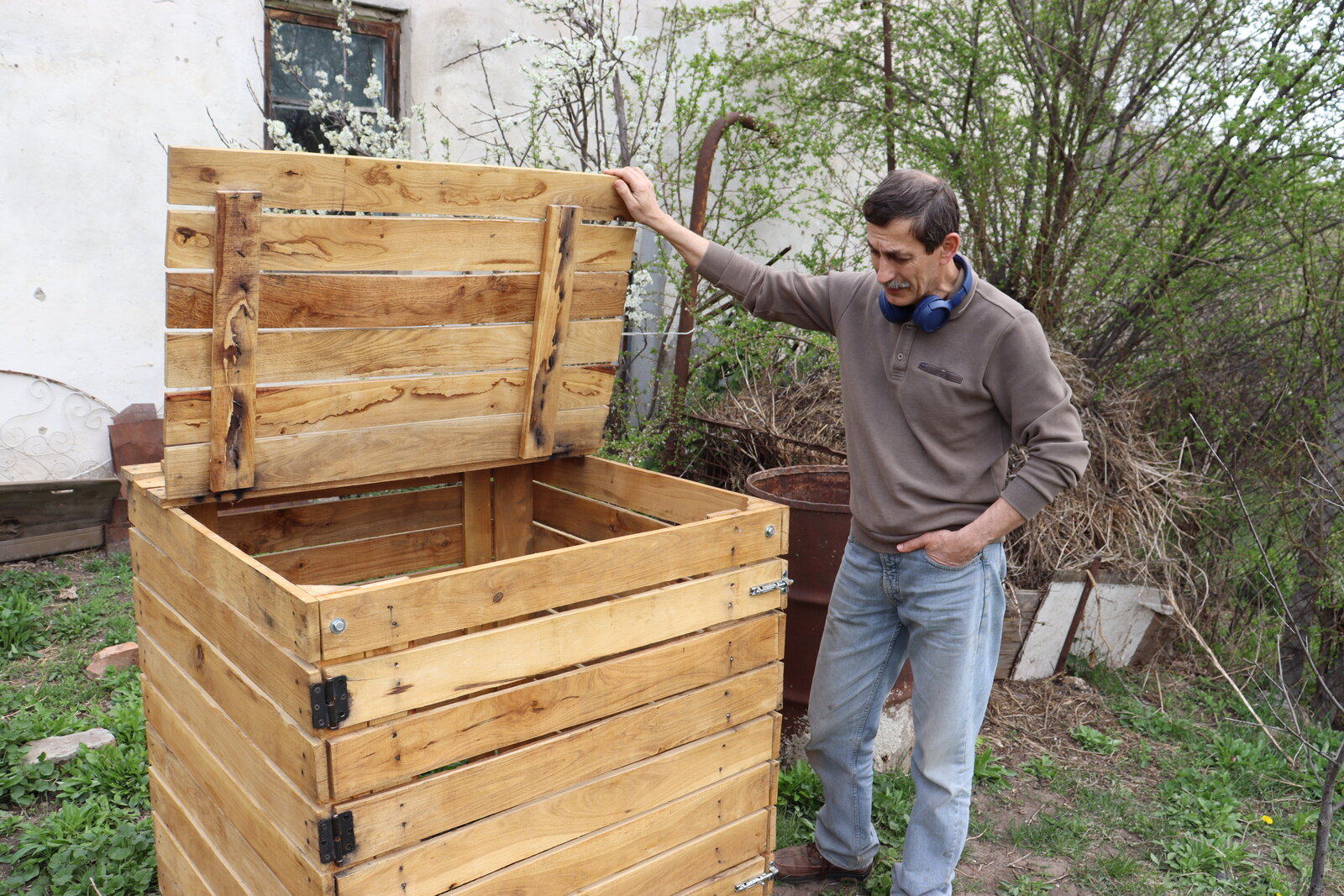 You have to be extremely dedicated to an area to talk about composting the way a masterchef does about making a Ratatouille. After talking to Serghei, I do not  find the comparison exaggerated because compost is nothing more than a "stew" for bacteria that are harmless to humans and very useful for the soil.

Composting time depends on the size of the chopped ingredients

"As you can see around the bin are prepared piles of leaves, twigs, grass from the lawn, and in the makeshift bin in a barrel we collected the kitchen scraps. We don't forget that we feed the bones and meat to the puppies. You've already noticed that the compost bin has no bottom - it's like a loophole for earthworms, beetles and soil micro-organisms to enter the vegetable scraps like in a fine restaurant” revealed Serghei.

Srghei carried on and exhibited how inthe bin, directly on the ground they lay a layer of twigs, then leaves, grass and kitchen scraps. Just like baking a layer cake. He added that it's important that all the leftovers are shredded - the more shredded the raw material, the faster the micro-organisms will complete the composting process.

“One more detail - periodically wet the layers to the consistency of a wet sponge, but don't overdo it. The box we received also has a door at the bottom so that we can periodically check how the process is going. Depending on compliance with the requirements, but also on outside temperatures, the compost will be ready in a period of one month to one year." persisted Serghei.

On the banks of the Dniester, every self-respecting fisherman should have a mini-composted worm farm

"For me, composting has become more than a hobby. I strive to share my experience, talking to colleagues, neighbours, relatives, that from organic and biological waste we can make excellent compost, which some still buy from garden centres, while it would be very simple and more reasonable to produce it at home. 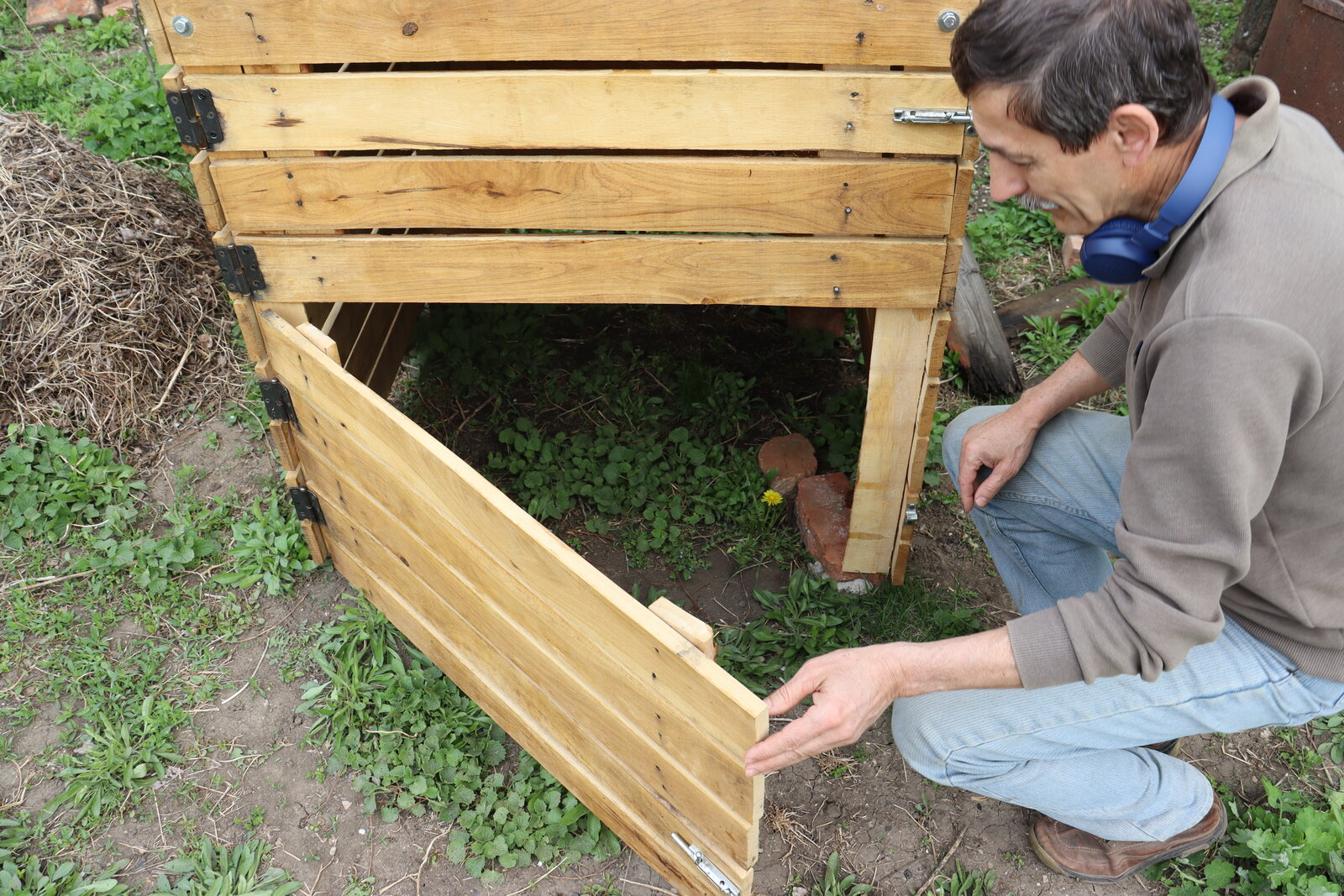 Serghei voiced that they are  on the banks of the Dniester River and any self-respecting fisherman should have a mini compost worm farm at home, and not dig the banks with a pickaxe looking for bait.

I left Criuleni convinced that people like Serghei and Olga will slowly but surely make things in this town move for the better - the streets will become cleaner, unauthorised rubbish dumps will disappear, and the banks of the Nistru River will return to their former authenticity. I live further downstream, also on the Dniester. I also have a garden. I also go fishing sometimes. And what I've seen in the Lysenco's garden makes me think I will soon start composting too.

The donation of the 30 composting bins is part of activities within the project "Development of a functional and sustainable waste management system in the city of Criuleni", implemented by Caritas Slovakia and Caritas Czech Republic, funded by SlovakAid.